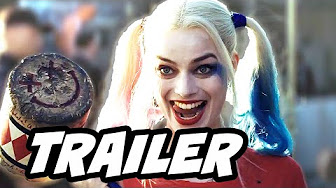 Sadly, this splattered mess never firmly grasps its bid for distinctive irreverence or off-balance exploitation. Naturally, desperation has set in for the U.

What better way to hire gifted protection than to consider employing the world's most incarcerated corruptible, cutthroat cretins to perform the dirty work in unforgivable mission ops that require death-defying determination.

Enter U. Waller's duties are to assemble the ragtag team known as the Suicide Squad--ominous yet talented jailbirds tapped to step in and assume superhero status especially when the real superheroes are tied up in other crime-stopping affairs while helping out for the greater good of our vulnerable society.

In exchange for the Suicide Squad's sacrifice in turning from hell-bent heels to reluctant heralded heroes they are promised commuted prison sentences should they effectively defend and destroy the deadly foes out to promote heavy-handed havoc across the board.

Conveniently, bureaucratic bigwig Waller through voiceover introduces the Suicide Squad and describes what beneficial assets they bring to the turbulent table.

The movie never realizes its excitable potential and drifts into yet another superhero yarn that is more patchy than pronounced.

Smith's Deadshot is out in the forefront but for the most part feels restrained and not as spry and savvy as one would imagine.

Leto's Joker obviously pales in comparison to the brilliant and mesmerizing psychotic take on the role that earned the late Heath Ledger his posthumous Oscar statuette.

In all fairness, nobody could inhabit the Clown Prince of Crime as Ledger uncannily did with committed concentration.

And just like this year's BvS, this movie received overwhelmingly negative reviews by the critics and was divided among the fans.

Enjoyed both Man of Steel and BvS. But unfortunately, this one's a mess. The majority of the movie just feels choppy, editing was all over the place.

Like they had a final product but because of disagreements, they took out a lot of scenes, shorten the runtime, and added others, making a giant choppy mess in the end.

Scenes don't properly flow, including the flashbacks. Some scenes feel like they were added later Probably the re-shoots and they definitely didn't fit, particularly the elevator scene with Harley.

The songs were all over the place as well. Some worked with their respective scenes, but most of them didn't, and again it felt like something added later, to give the movie a more jolly feel.

Basically, to me it felt like that the movie reeked of studio involvement. Also, the focus was just off. Movie is called Suicide Squad yet there is a whole lot of other stuff that gets way too much screentime.

The whole end of the world plot was totally generic, uninteresting and unnecessary. The villain wasn't good, and the movements were weird, and not in a good way.

Joker-Harley romance was also something padded on, and could have been removed in exchange for more screentime with the squad.

Jared Leto felt like he was trying too hard at times. There were moments where I saw the Joker I wanted in him, but those moments were swiftly followed by over the top feel that he gave most of the time.

And that laugh Yeah NOPE!! Even the action was mostly OK, apart from a couple of good scenes. There was no proper thrill, no proper buildup.

Too many cuts. Say what you want about Snyder, but you have to admit that the dude can atleast direct amazing action sequences. And all of that sucks because there is stuff in the movie that works, like the main squad.

Will Smith as Deadshot was great. He played his usual cool self and it worked. Margot Robbie as Harley Quinn was sexy and mostly good, because there were few instances where her dialogues gave me cringe.

These two had a good chemistry together too. Also liked other members like El Diablo, Killer Croc, and captain Boomerang, all of whom were likable, had some fun moments etc.

Plus, among all the mediocrity, there were glimpses of what the movie could have been like. Fun moments between the squad, some touchy moments, rare cool action sequences, full group scenes or rather a scene, the bar scene and such.

Ultimately, The movie is like a mediocre cake covered with a thin layer of good frosting. The overall taste isn't bad, but it isn't good either.

You enjoy the good frosting for a short while, and then have to deal with a whole lot of mediocre tasting body of the cake.

I was disappointed. Pushed back all the negative or positive criticism and went in with an open mind. I'm not too hopeful what the extended cut will improve as 13 mins of footage isn't much, and I'm guessing it is Joker footage mostly.

It's funny that after watching this, I respect MCU more now considering what they were able to do with the more risky project: Guardians of the Galaxy.

Just like any pollution or the over population on the earth's surface. It needs stability, but nobody cares about it other than money making agenda.

I also think it's going to last for only a few more years, when this trend going to end like that happened in the 70s, 80s and the 90s.

And the space travel era to begin which is already kick- started. So DC or Marvel and others, they should be careful, for far they could take their products.

Like the title say, it's not just about the film characters, the film itself a suicidal. I'm not saying the film was unnecessary, but the plot was dragged too much.

There are too many pauses, or you can call time wasting moments. I could not take another blowing up city concept. And that swirling thing in the sky, I don't know how long they are going to use it in the superhero films.

I did not like the supernatural concept which is supposed to be a pure science fiction action adventure.

At least Thor was from another planet, more like he's an alien, but the witch in this film, ruined my appetite.

The actors were not bad and so the graphics, including the stunt sequences. The story was very familiar.

It was more or less, same as the animated flick 'Monsters vs Aliens'. It can be watched for entertainment purpose, the majority won't say it's their favourite or one of the best of the year.

But surely there are people who would love it. It was a massive box office hit and I don't see any hurdle for its sequel, but all I hope is it to get better in the follow-up.

So finally, it's not a bad film or boring, but it just did not have the midas touch that all the superhero films had. That means a watchable film, only for once.

But an entertaining, well-cast mess. First, there was the story--such as it was--itself: A super villain with the power to end the world goes to work in a universe that has established Batman and Wonder Woman.